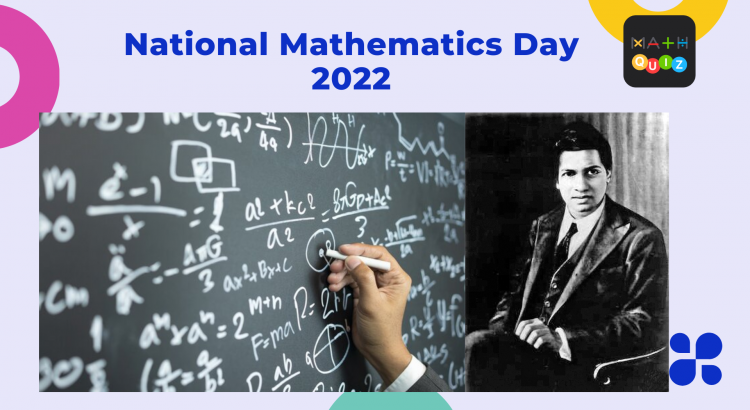 It is observed on 22 December every year to mark the birth anniversary of legendary Indian Mathematician, Srinivasa Ramanujan. The day recognizes and celebrates his works. On this day, the genius mathematician Srinivasa Ramanujan was born in 1887 to a Tamil Brahmin Iyengar family in Erode, Tamil Nadu.

In 2012, the former Prime Minister of India, Dr. Manmohan Singh, paid tribute to Srinivasa Ramanujan at a function organized on the occasion of the birth anniversary of the great mathematician Srinivasa Iyengar Ramanujan in Chennai. 22 December was declared National Mathematics Day. Thus, on 22 December 2012, National Mathematics Day was celebrated across the country for the first time.

The main objective behind the celebration is to raise awareness among people about the importance of mathematics for the development of humanity. We can’t ignore that several initiatives are taken to motivate, enthuse, and inculcate a positive attitude towards learning mathematics among the younger generation of the country. On this day, training is also provided to the mathematics teachers and students through camps and highlights the development, production, and dissemination of teaching-learning materials (TLM) for Mathematics and research in related areas.

How is National Mathematics Day celebrated?

National Mathematics Day is celebrated in various schools, colleges, universities, and educational institutions in India. Even the International Society of UNESCO (United Nations Educational, Scientific and Cultural Organisation) and India had agreed to work together to spread mathematics learning and understanding. Along with this, various steps were taken to educate the students in mathematics and spread knowledge to students and learners all over the world.

NASI (The National Academy of Science India) is the oldest science academy situated in Allahabad. To celebrate National Mathematics Day, NASI conducts a workshop on applications of Mathematics and Ramanujan. The workshop is attended by popular lecturers and experts in the field of mathematics from across the nation. Speakers at the country and world levels discuss Srinivasa Ramanujan’s contribution to mathematics.