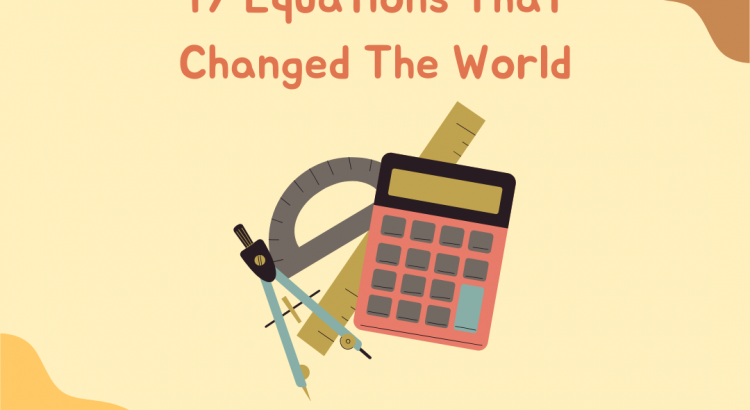 Mathematics is everywhere, a small equation you studied in your childhood is been a big reason for many changes in engineering and technology around the world. In 2013, famous author Ian Stewart published the book “17 Equations That Changed The World“. This book elaborately explains each equation and how it molded engineering to human accessible day-to-day technologies, which really inspired me to write this.

Equations That Changed The World

The Pythagorean theorem is a statement in geometry that shows the relationship between the lengths of the sides of a right triangle – a triangle with one 90-degree angle.

A logarithm is a power to which a number must be raised in order to get some other number.

Calculus is a form of mathematics that was developed from algebra and geometry. it is made up of two interconnected topics, differential calculus, and integral calculus.

5. The Square Root of Minus One

An imaginary number is a complex number that can be written as a real number multiplied by the imaginary unit I, which is defined by its property i2 = −1.

A (convex) polyhedron is called a regular convex polyhedron if all its faces are congruent to a regular polygon, and all its vertices are surrounded alike. Plain experimentation with sticks will allow you to easily construct 5 regular polyhedra: tetrahedron, cube, octahedron, icosahedron, and dodecahedron.

The normal distribution, also known as the gaussian distribution, is a probability distribution that is symmetric about the mean, showing that data near the mean are more frequent in occurrence than data far from the mean.

The wave equation is an important second-order linear partial differential equation for the description of waves—as they occur in classical physics—such as mechanical waves (e.g. water waves, sound waves and seismic waves) or light waves. It arises in fields like acoustics, electromagnetics, and fluid dynamics.

The fourier transform (ft) decomposes a function of time (a signal) into the frequencies that make it up, in a way similar to how a musical chord can be expressed as the frequencies (or pitches) of its constituent notes.

This equations arise from applying isaac newton’s second law to fluid motion, together with the assumption that the stress in the fluid is the sum of a diffusing viscousterm (proportional to the gradient of velocity) and a pressure term hence describing viscous flow.

Maxwell’s equations are a set of partial differential equations that, together with the Lorentz force law, form the foundation of classical electromagnetism, classical optics, and electric circuits. The equations provide a mathematical model for electric, optical and radio technologies, such as power generation, electric motors, wireless communication, lenses, radar etc.

The second law of thermodynamics states that the total entropy of an isolated system can never decrease over time, and is constant if and only if all processes are reversible. isolated systems spontaneously evolve towards thermodynamic equilibrium, the state with maximum entropy.

Schrodinger’s equation is a mathematical equation that describes the changes over time of a physical system in which quantum effects, such as wave particle duality, are significant.

Chaos theory is a study in mathematics to understand the dynamic behavior of nature. the butterfly effect is the best example of chaos theory, small wings flapping in one state can cause big effects at a later stage. chaos theory deals with nonlinear things that are effectively impossible to predict or control. it is also called the deterministic behavior of the system. newtonian laws are completely deterministic.

Black–scholes–merton model is a mathematical model for the dynamics of a financial market containing derivative investment instruments.